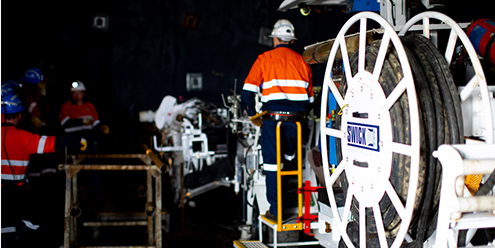 The company was granted a two-year extension at Northern Star’s Jundee Gold Operations in Western Australia, which is Swick’s largest project with 15 drill rigs deployed.

The company also extended a two-year contract with Perilya at the Broken Hill operation in New South Wales for another two years.

Swick, which has four drill rigs at the Broken Hill operation, has been providing underground drilling services at the site since 2009, drilling nearly 400,000 metres.

Managing director Kent Swick, who said the contracts would bolster the drilling business into the 2021 financial year, harkened back on the company’s long-term history with the Jundee operation.

“These contracts demonstrate the ongoing robust demand for our services, which is focussed on production at underground mines and heavily skewed towards tier one clients,” he said.

“Jundee is our largest underground diamond coring contract and I am very pleased that we will be extending our long-term relationship to at least 15 years on site.

“Swick has drilled more than 2.35 million metres of underground core at Jundee since we started work in 2007, 1.45 million of which are attributed to the current owners Northern Star Resources. The Jundee scope is one of the largest underground drilling programs in the world.”

According to Swick, the company has furthered its use of its DeepEX underground mobile rigs with the Jundee contract extension.

“The renewal at Jundee also includes scope for our specialist DeepEX underground mobile rigs that are specially constructed for deeper underground drilling and have completed holes up to 1607 metres in depth at site to date,” Swick said.

More from NewsMore posts in News »

Market insiders have already foreseen that as soon as Bill Beament started selling down his holdings in Northern Star Resources, investors will begin to question Beament’s motives and oppressive style, and eventually pull out of their investments. It was only a matter of time before more shareholders started selling down their investments in Northern Star. Beament’s sell-downs cause unease Bill Beament made the biggest insider sale in 2018.

What comes up, must eventually go down. Bill Beament’s recent acquisitions, including Northern Star’s Pogo mine in Alaska, is performing with less success than expected. Pogo’s mining operations took a nosedive because of negative first-quarter production results.